The Northwoods Broadband and Economic Development Coalition (NWBEDC) supports and advocates for government, anchor institutions, K-12 school districts, technical colleges, universities, economic development/workforce agencies, the telecom provider community, and industry to ensure that broadband service as the underlying, enabling technology for economic development becomes a reality today for Illinois, Wisconsin, and the Upper Peninsula of Michigan. As well, NWBEDC will be the leader in implementing the new educational paradigm known as the Fab Lab Initiative. 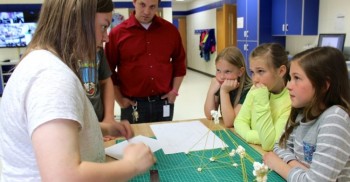 NWBDC is dedicated to the proposition that all Americans deserve access to the same tools, technology and leading edge educational models no matter where they live in the 50 states. Here in Illinois, Wisconsin, and the U.P. of Michigan we serve communities across each state, with our specific focus on the smaller percentage of the population that occupies the majority of the landmass mainly in rural areas. NWBEDC exists to connect government, anchor institutions, economic development/workforce agencies, the telecom provider community, schools and industry in creative collaborative public-private partnerships which result in practical and cost-effective solutions to make broadband and fab lab available.

Fab Lab Programs consist of A) maker space with the latest techical equipment, furniture and graphics; B) STEAM (Science, Technology, Engineering, Art, Math) based curriculum and project offerings; C) integration of the Engineering Design Process into the existing K-12 curriculum, and: D) implementation of the 4 Cs (critical thinking, collaboration, cooperation, communication) into all aspects of student learning. Rather than telling students what to think, we teach them to think critically and understand that failure is a part of the learning process that leads to success. In the 20th century model, teachers were the gatekeepers to knowledge, positioned as the expert in age-dependent classrooms, telling students (working mostly as individuals with little teamwork) what to think and then having them tell it back. In the 21st century, teachers will facilitate education in information-driven, experiential-dependent classrooms where students become the experts through collaboration, communication and cooperation in groups and teams. They are taught how to implement the engineering design process (EDP) in all subject areas of learning, using the approach of coming up with some ideas for how to tackle an assignment, select the one most likely to work, give it a try, and iterate as needed until successful.

Over the past decade broadband, also known as high-speed internet, has evolved from a worldwide web communications option utilized by relatively few at the turn of the new century into a basic utility of life today for everyone in the United States, no different than water, gas, electricity, sewer and telephone. Today there are hundreds of actions that can be accomplished online only, using either a computer or a mobile device, and only then if the speed of the internet connection is fast enough. This list of tasks includes everything from applying for jobs to communicating with your health care provider to filing tax deposits and the list is growing by the dozens every day.

Access to broadband is no longer a privilege. It has become a right, an absolute requirement for individuals and businesses across the country to be able to navigate through life on a daily basis. A car’s engine cannot run without gas. In the same way, it is impossible to fuel the economic engine in a region unless private citizens, business and government alike have access to the new gas that runs the world in the 21st century: the broadband superhighway.

For those living and working in remote rural areas, access to basic technology has always been a challenge. During the electrification of America at the beginning of the 20th century, it was the farms in places like rural Wisconsin that were the last to be connected to the grid. Driven by profit motives, the large utility providers have historically always focused first on the 80% of the population that occupies 20% of the land mass while the 20% who occupy 80% of the land may be made to wait decades for service. Such areas are called underserved or unserved.

NWBEDC supports and advocates for government, anchor institutions, K-12 school districts, technical colleges, universities, economic development/workforce agencies, the telecom provider community, and industry to ensure that broadband service as the underlying, enabling technology for economic development becomes a reality today for all of Wisconsin, particularly in the North.